I spent last weekend in Stavanger at my parents house, just relaxing, taking in the salty North sea air, watching the waves, photographing, having delicious prawns and doing no (yes, that's right:-) thrifting! Still, I managed to bring home some treasures. My dad's been at it again, and has made me another gorgeous bag. He makes them out of thick, delicious, natural tan leather that turn into a wonderful golden brown after some use and a few rounds of beezwax. I've had the large bag to the right for around a year. It's my everyday bag that I use for work. It has a long strap and can carry just about anything, my laptop, umbrella, hairbrush etc. The new bag is a much smaller size with a short strap. I'm such a lucky girl, he's made me a camera bag, belt and make- up bag. Apart from the unsurpassed leather and handcrafted quality, they're extra precious because dad made them! See more pics here. 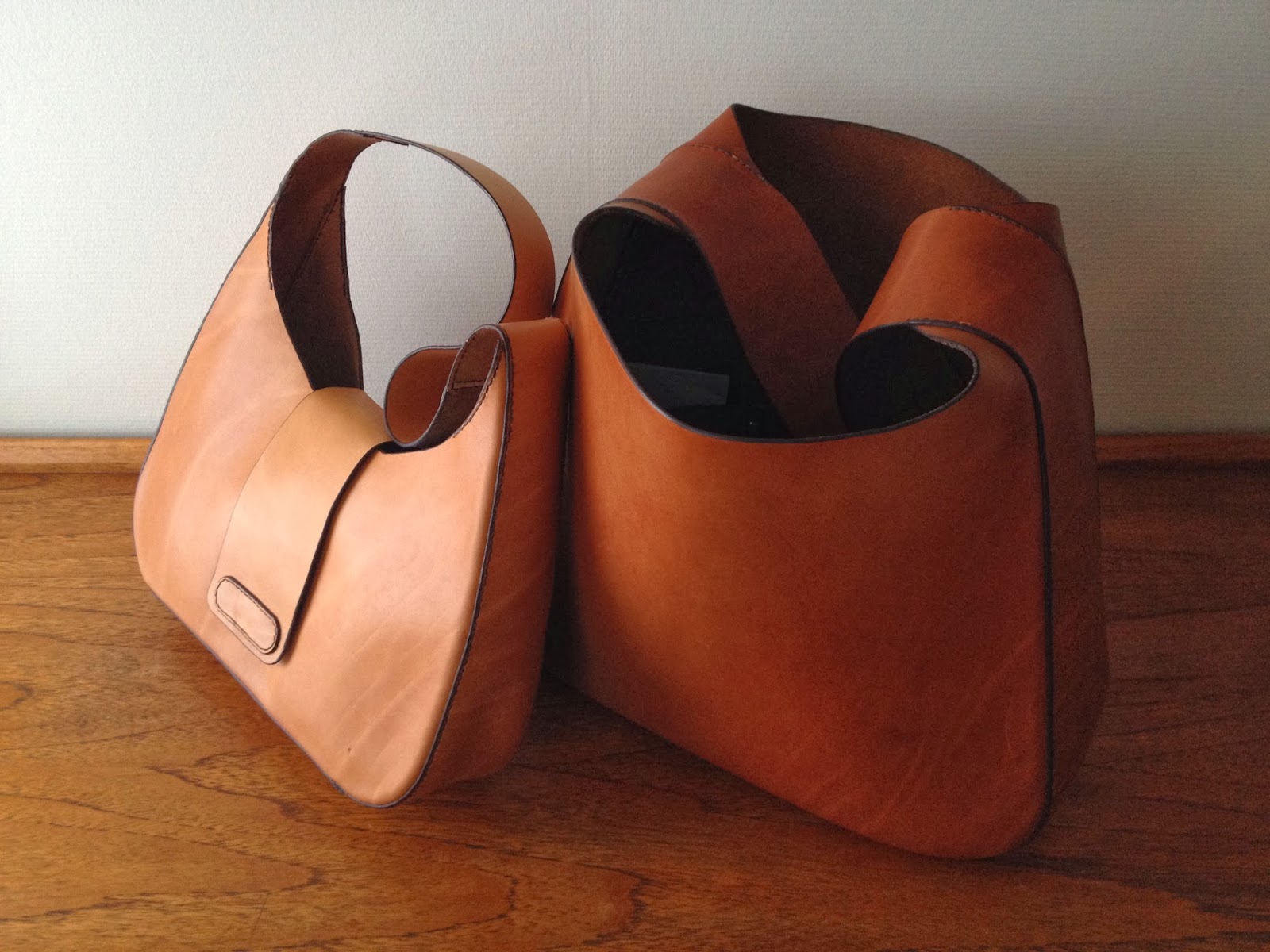 I also brought home some of my grandmothers old pottery. Aren't they lovely? The one to the left is traditional Sandnes pottery. It's not stamped, but it must be either Gann, Graveren or Gann Graveren (after the two companies merged). My collection of this pottery is now quite numerous, and this is the smallest one until now, it's only 13 cm tall (the largest one is almost 40 cm and is the home of a large Monstera). My dad told me he remembers his mother used it for jam. It has a little less glaze than the bigger ones. The two planters in the middle are unmarked, and I have no idea who made them. They have an unusual glaze that's quite lovely. The last and biggest one is Strehla. 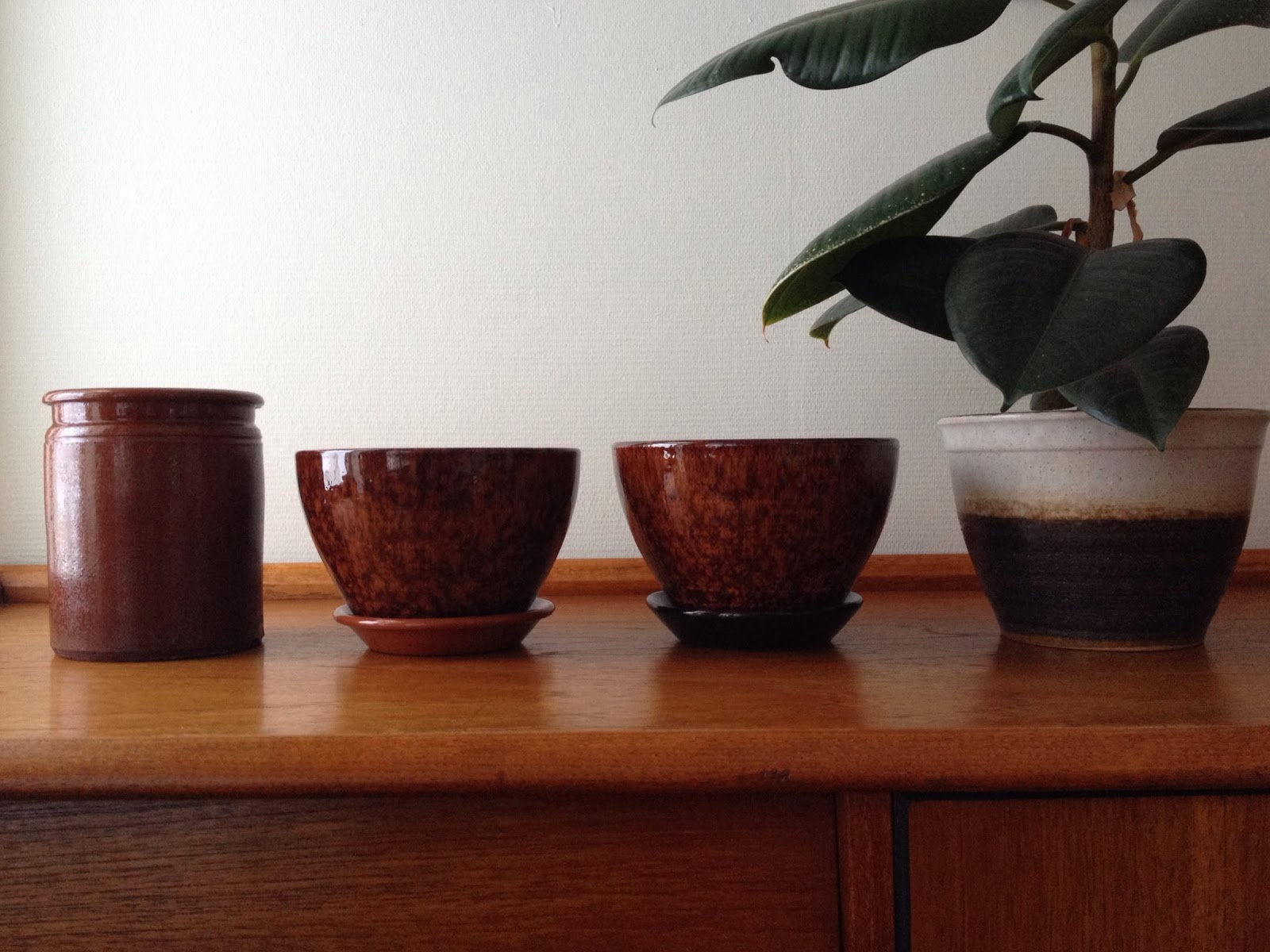 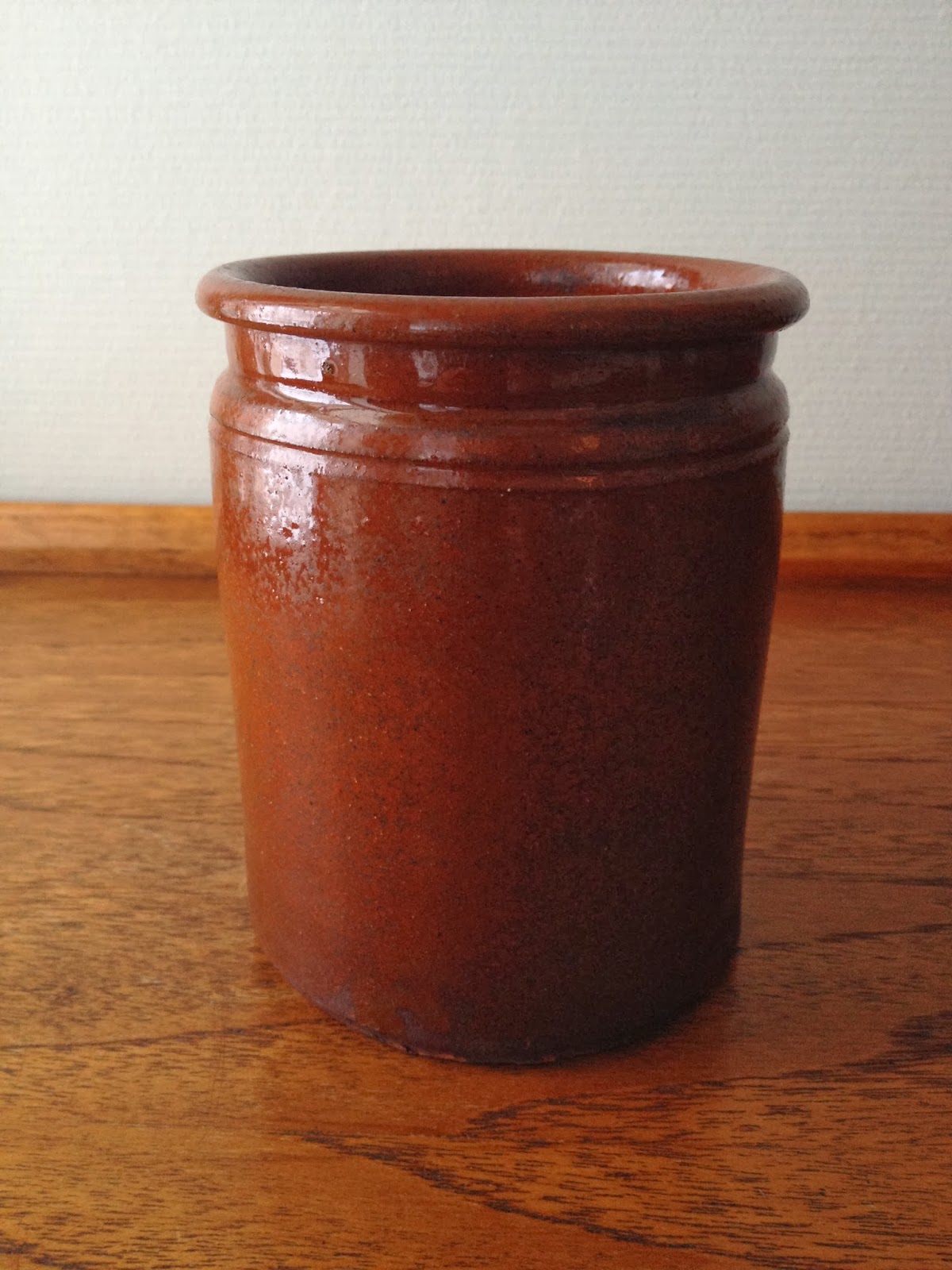 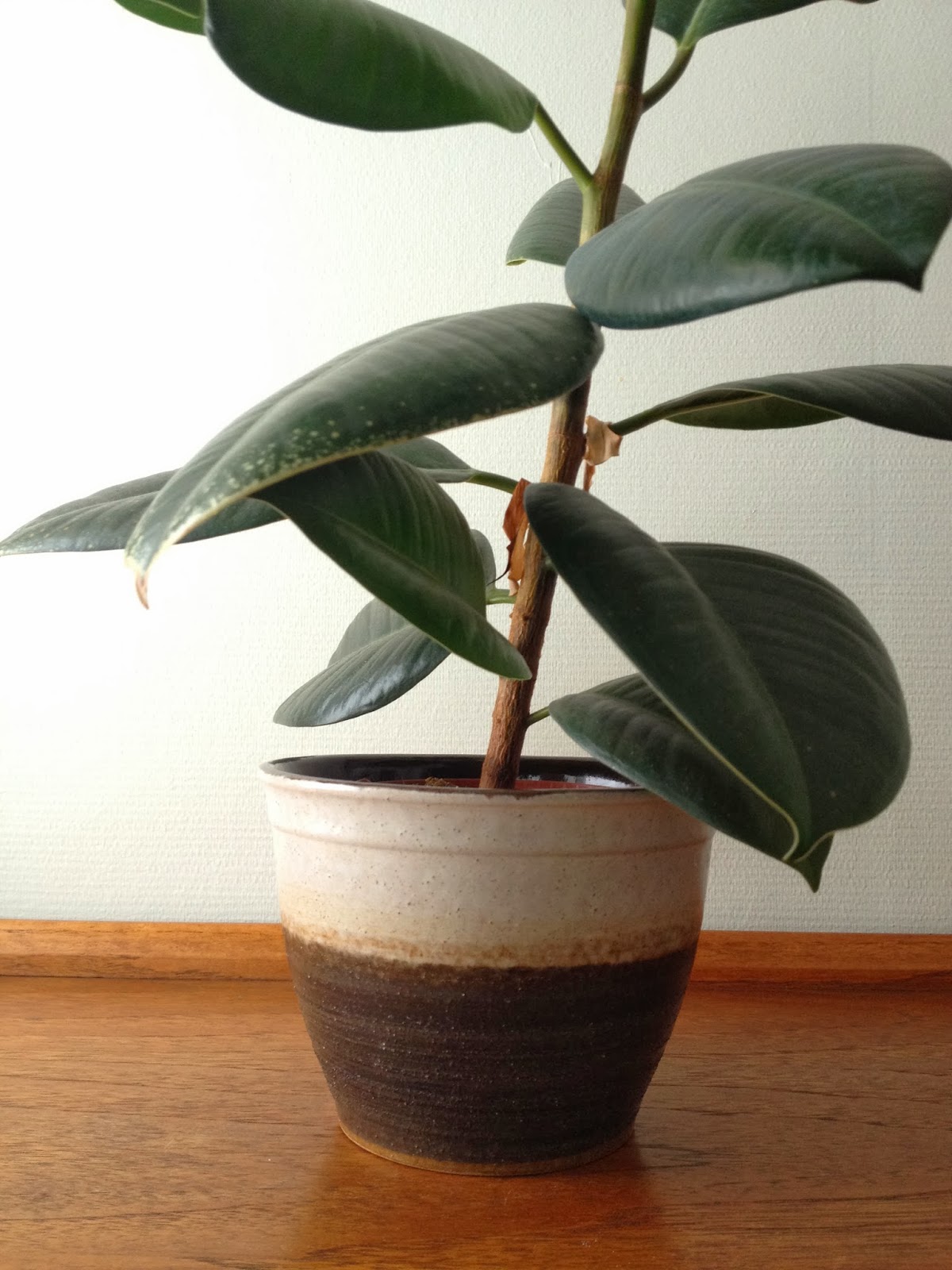 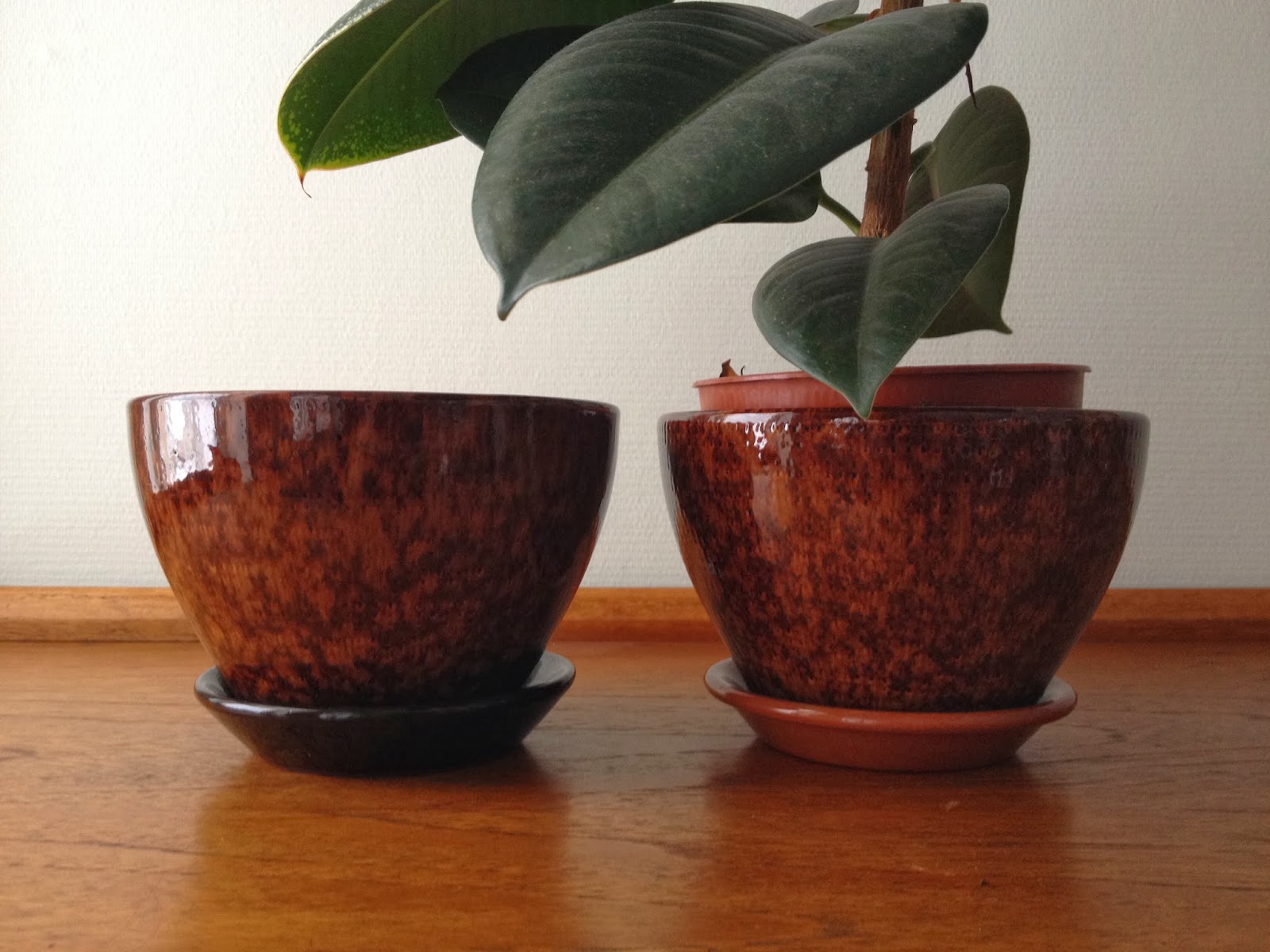 Do you remember I showed you my husband's lovely Stavangerflint plate that he had as a child? The pattern is "Venner" (Friends) and was designed by Gro Pedersen Claussen. My mum let me take my own Stavangerflint set back with me. The pattern is called "O du som metter liten fugl" and was designed by Anne Lofthus. I remember how I knew the pattern by heart and made up stories about the little birds and animals. I showed it on Instagram today, and got the sweetest comment from a lady from my home town, saying she remembers it from her kindergarden in the late 60s. She also told me she was sure one of the birds was named after her sister. I guess this shows how important the visual surroundings are for a child's imagination. 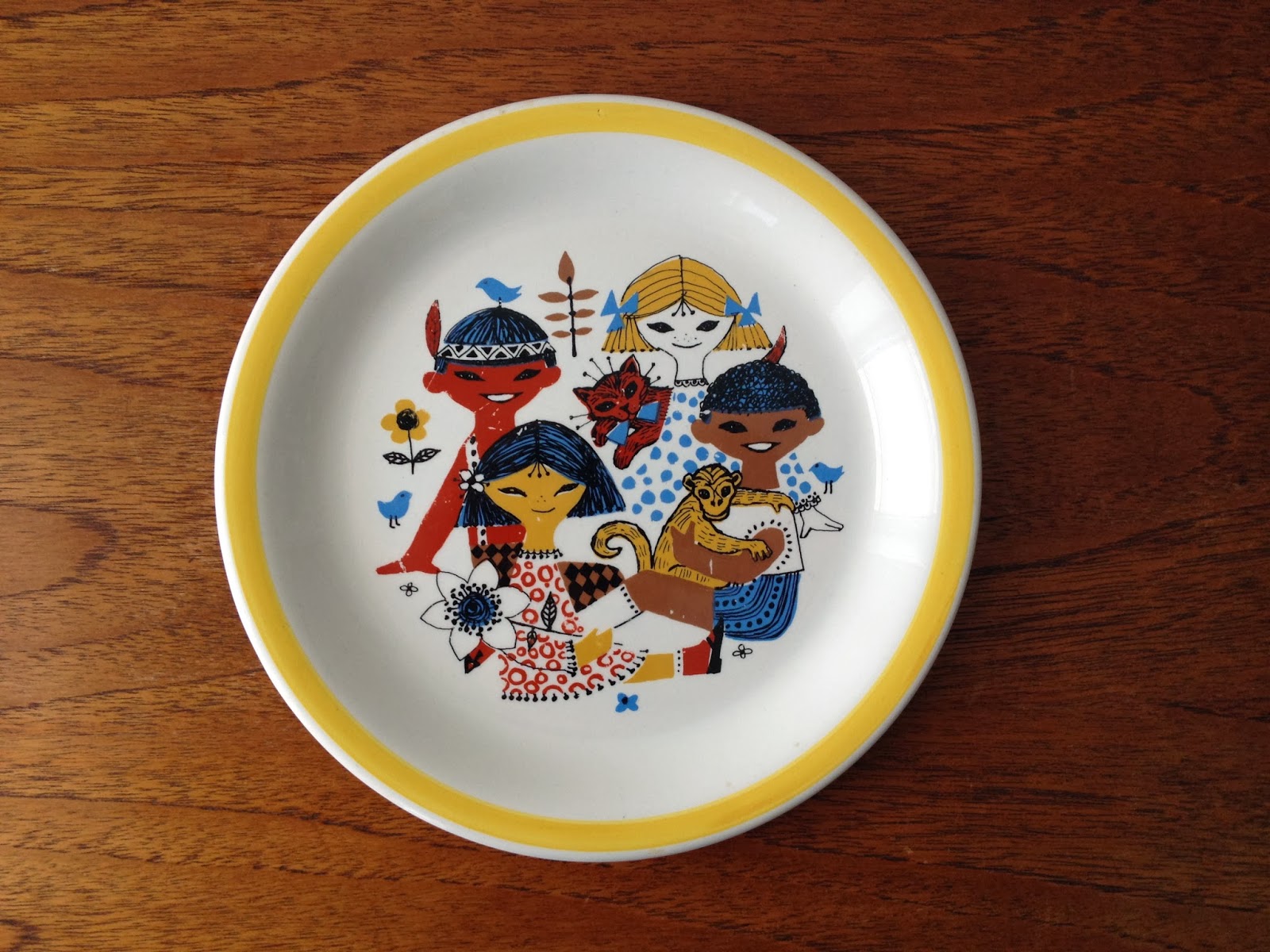 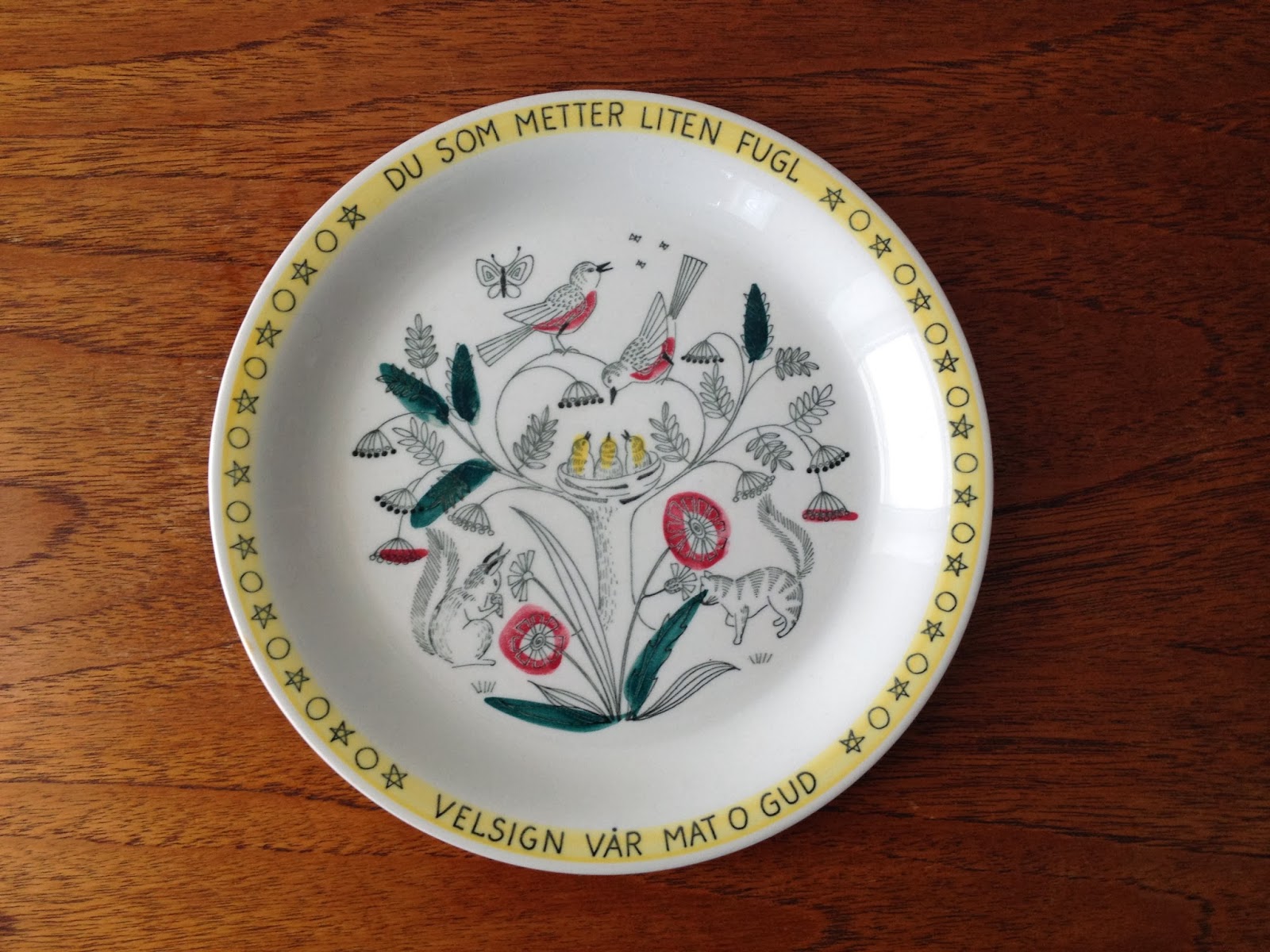 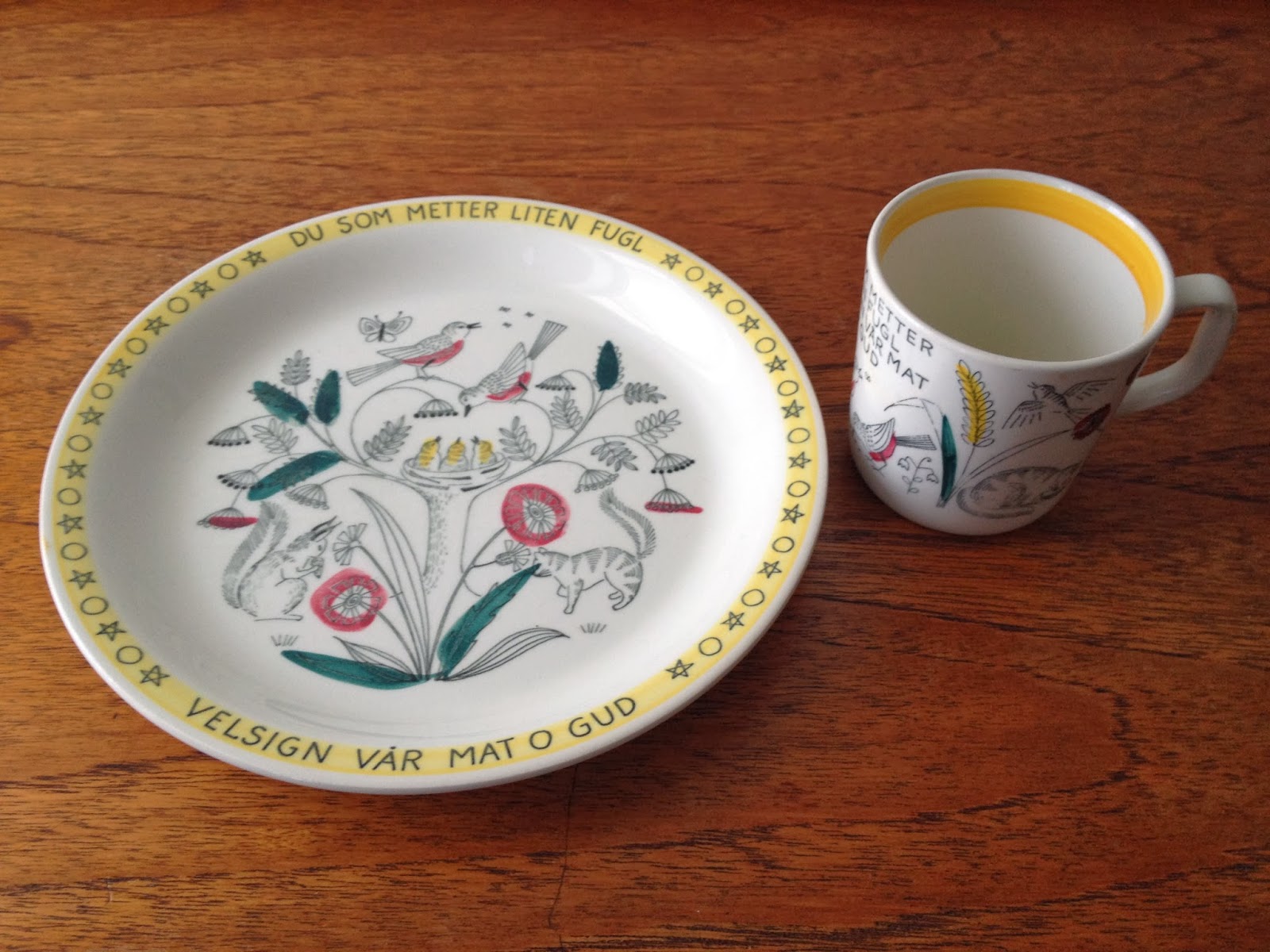 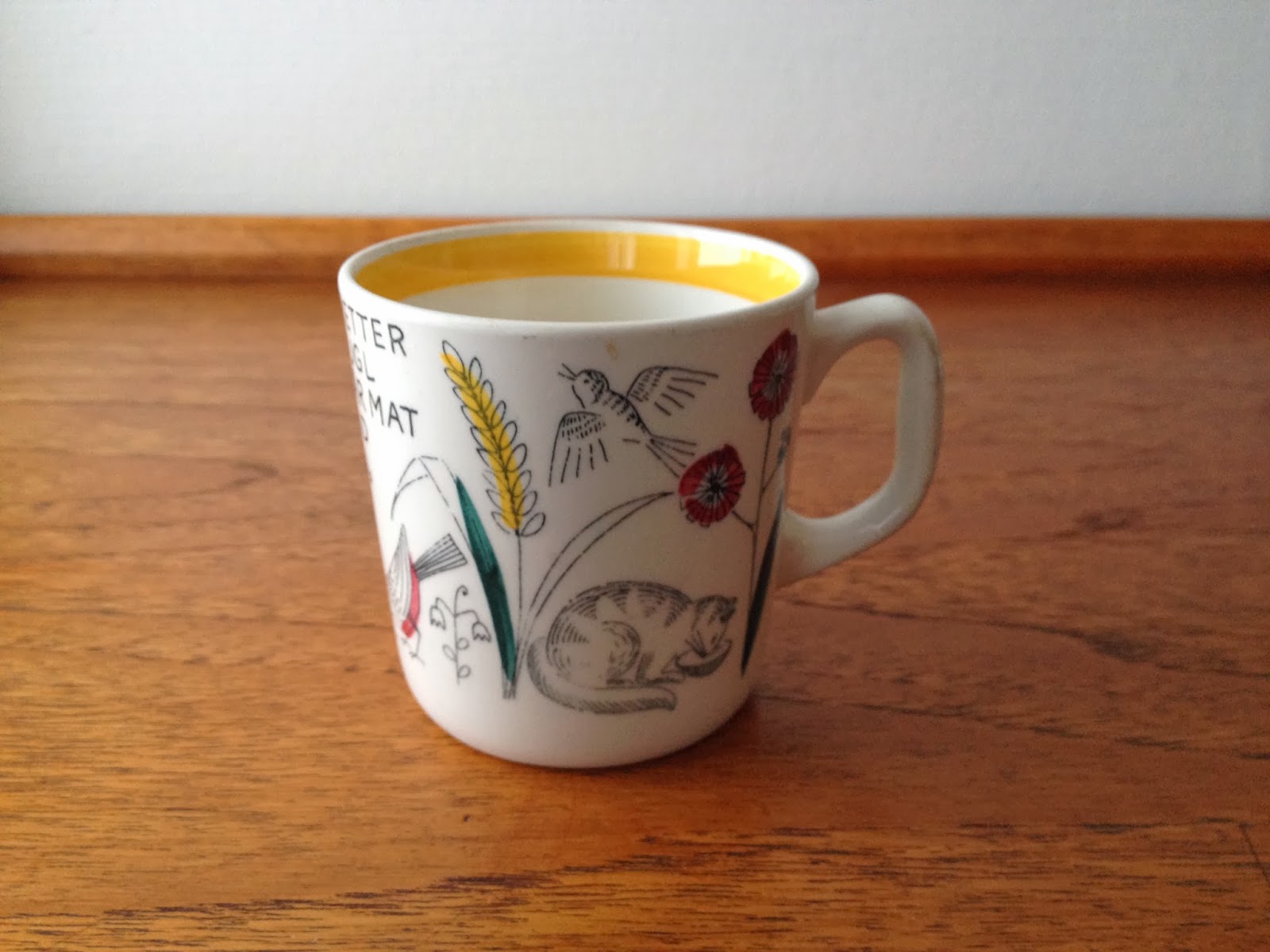 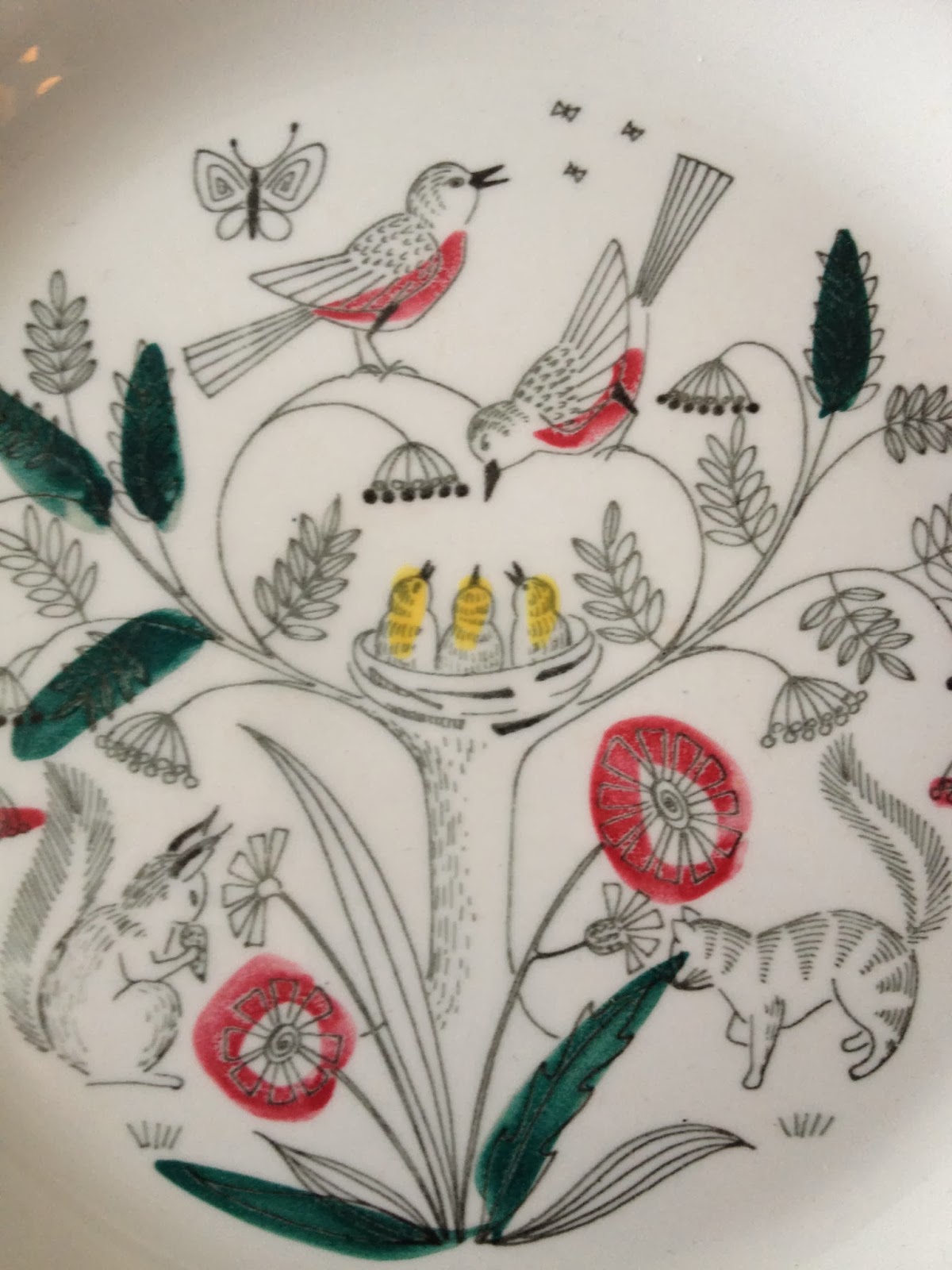 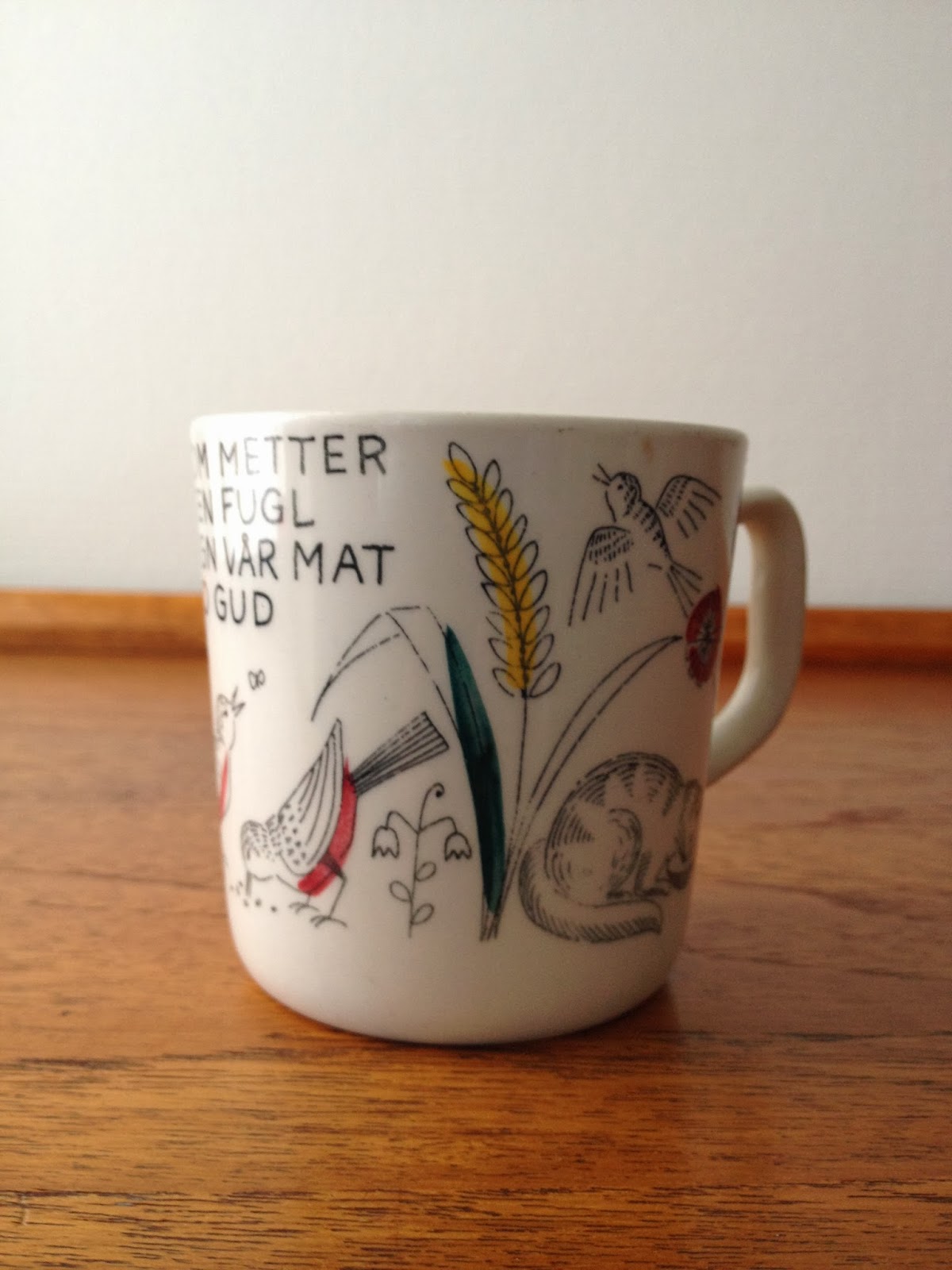 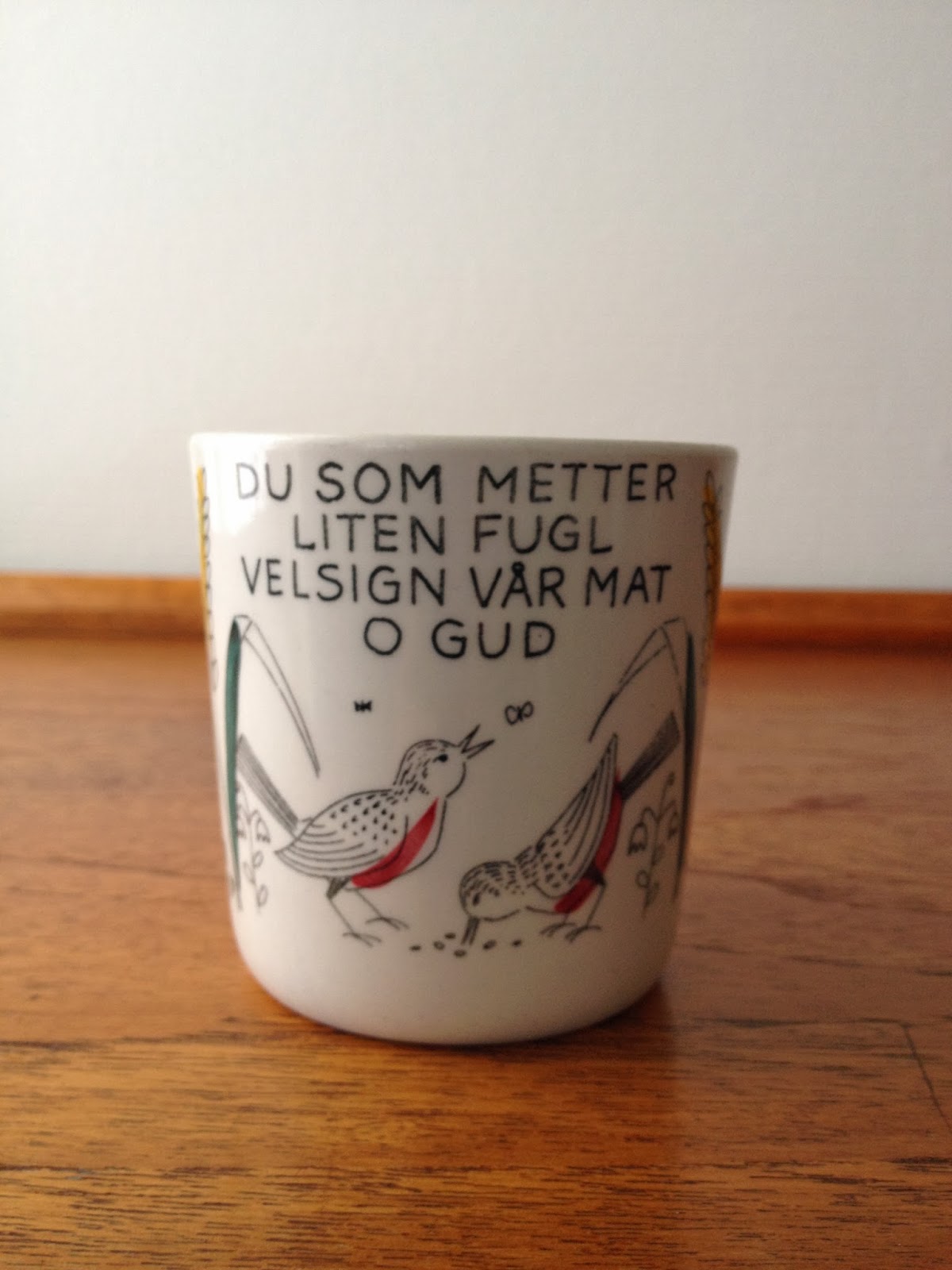 This weekend has been busy, but I managed to squeeze in a short stop at my nearest thrift store yesterday. It's a large shed really, but the owner really makes an effort, she lights candles and plays 30s music, trying to create a vintage atmosphere, she's a really sweet woman. I do pick up the occasional treasure there, this time I found these following pieces.

First out, a lovely little pitcher in Brunette by Stavangerflint. It's bigger than a creamer, smaller than a jug, perfect for custard or some other dessert sauce. Of course, a little bouquet of wild flowers would look just perfect in it too! Brunette was designed by Kåre Berven Fjeldsaa in the 60s. 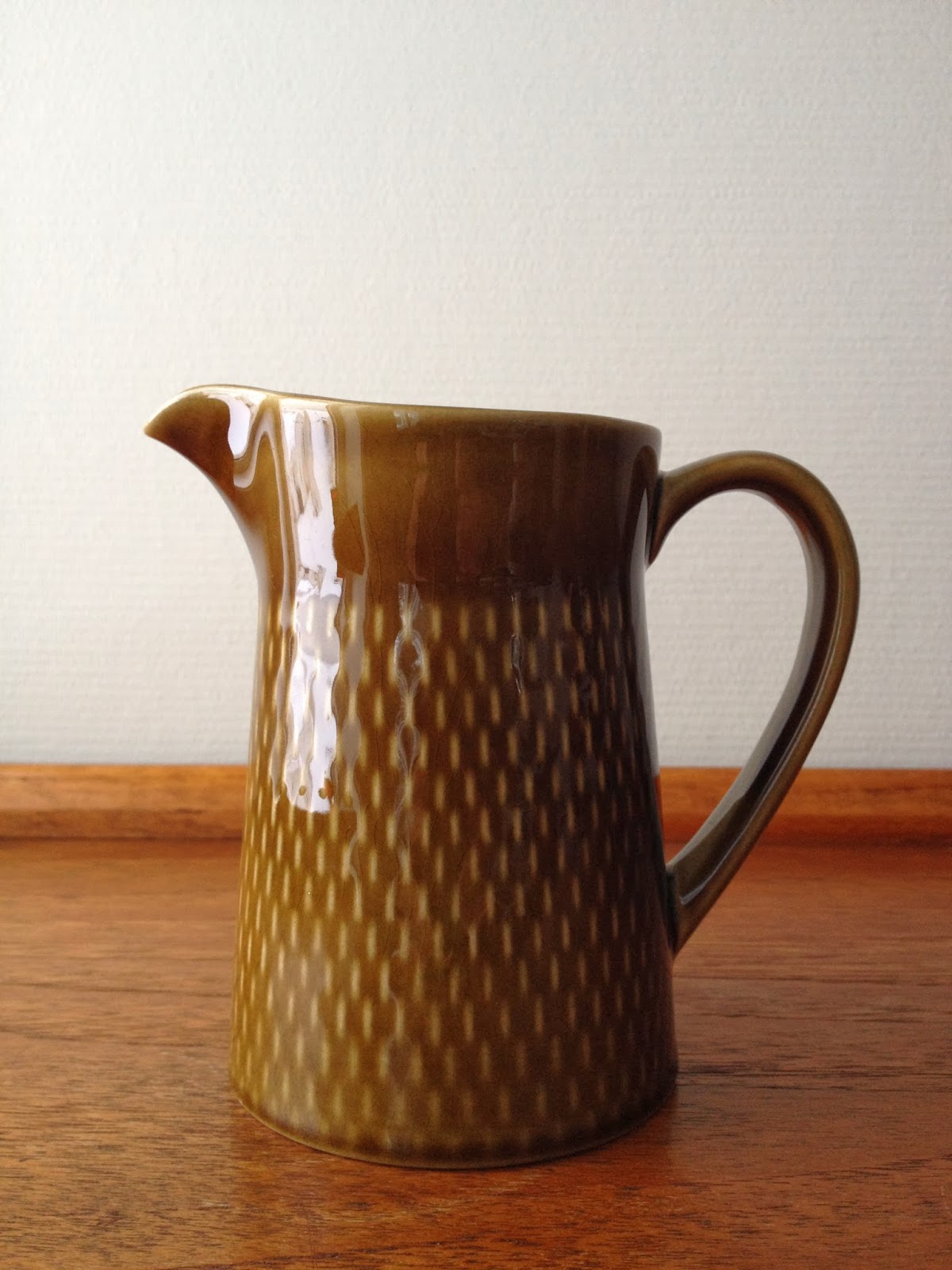 I was really thrilled to find two Stavangerflint "Mesterkokken" (Chef) dishes. The pattern was designed, silkscreened and handcolored by Inger Waage, and also came in blue. The design is from around the same time as "Bambus", as the same techniques were used. There was a tv-show made by BBC in 1961 that featured Inger Waage and her design "Mesterkokken", which means it was designed in 60 or 61, or maybe even the late 50s.
The pattern is a feast for the eye, so quirky and rich in detail. The colors are a combo I haven't really seen before, reddish brown, yellow and teal. They look great together. The blue version makes me think of the great dutch patterns used on Delft and the likes. I found two old pictures on the web, probably from Stavangerflint ads, of tables set with the two versions of the design. I must say those flower arrangements surpass mine by far!! That wooden backdrop is gorgeous, don't you think? 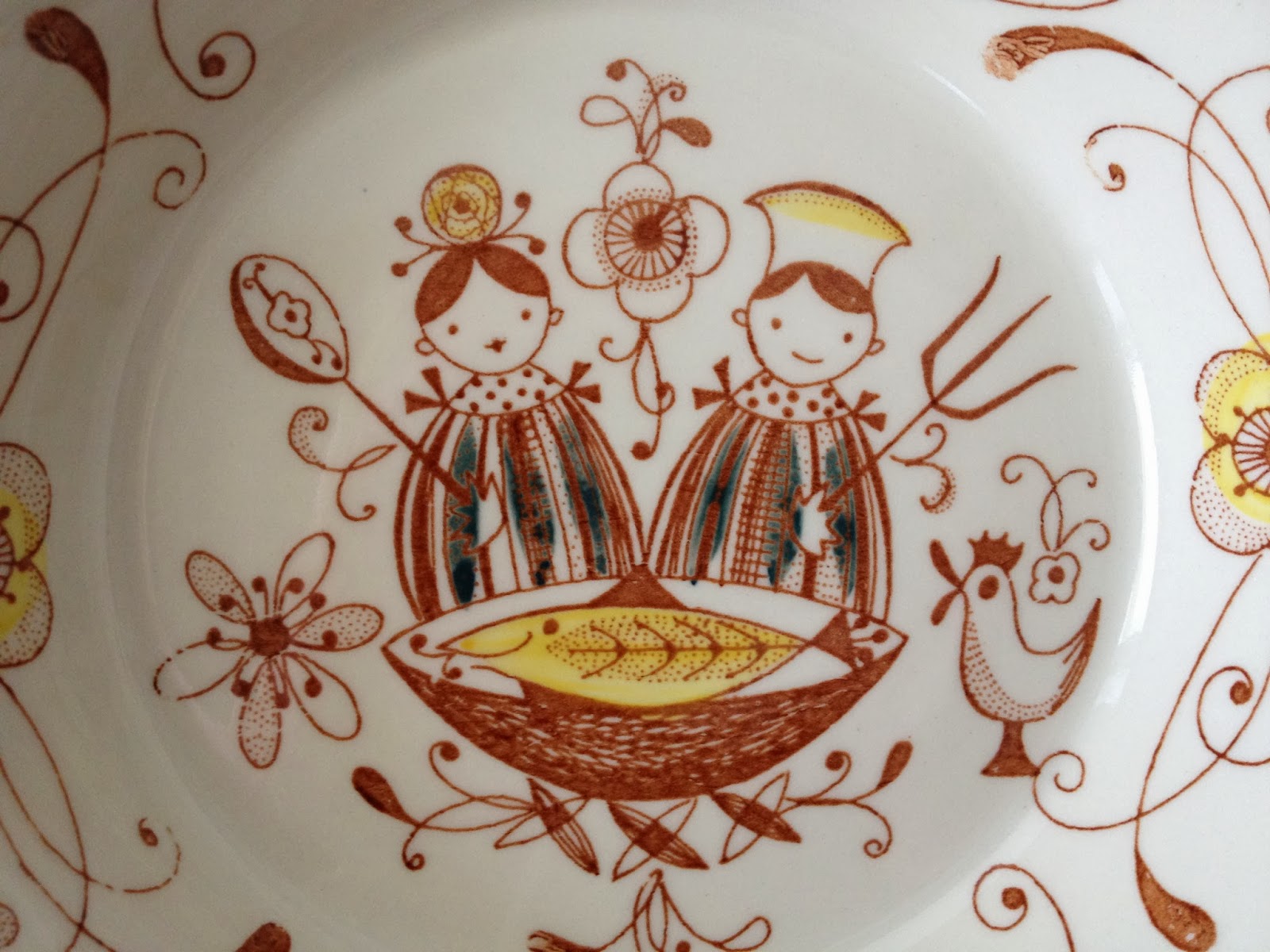 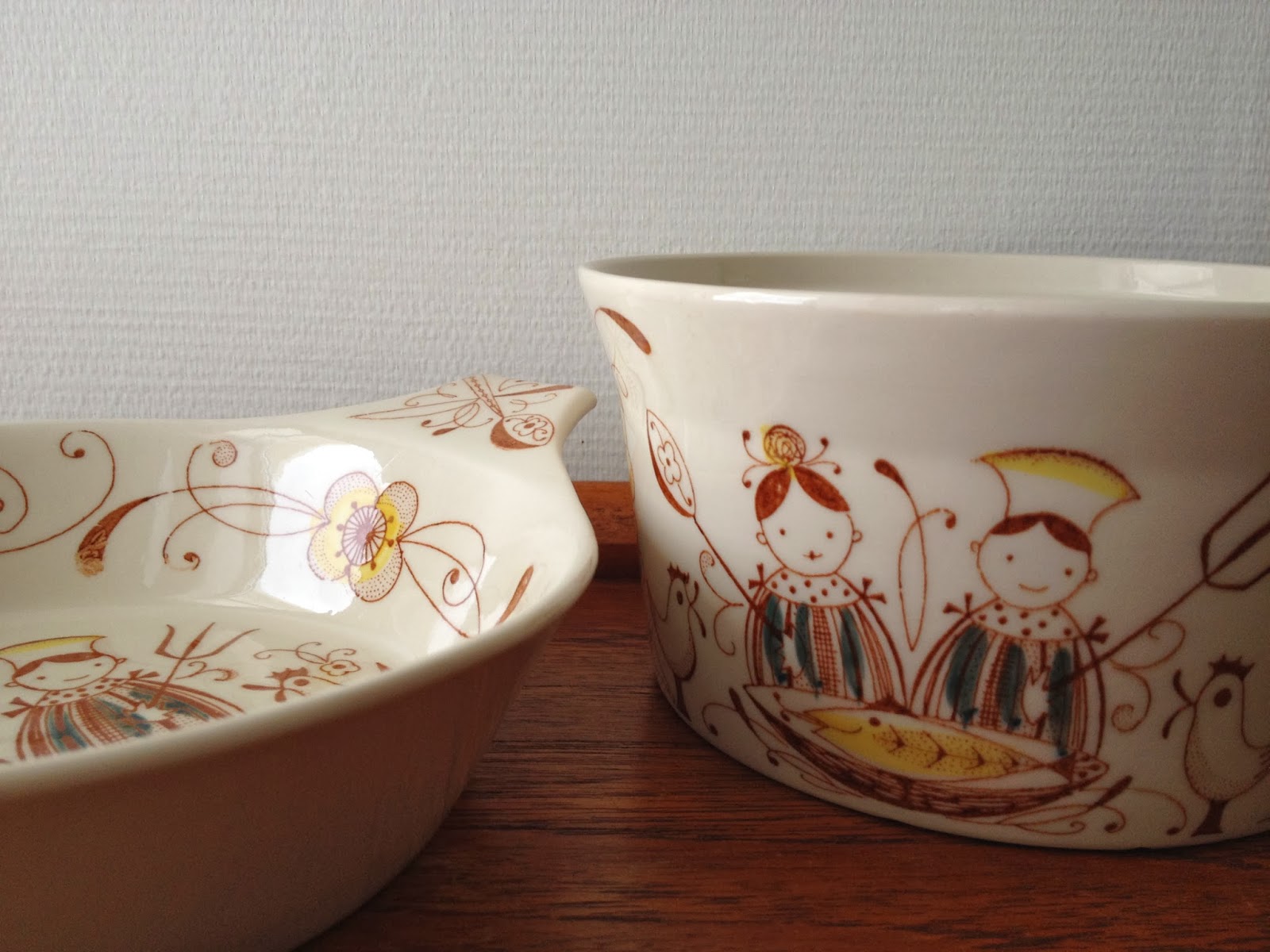 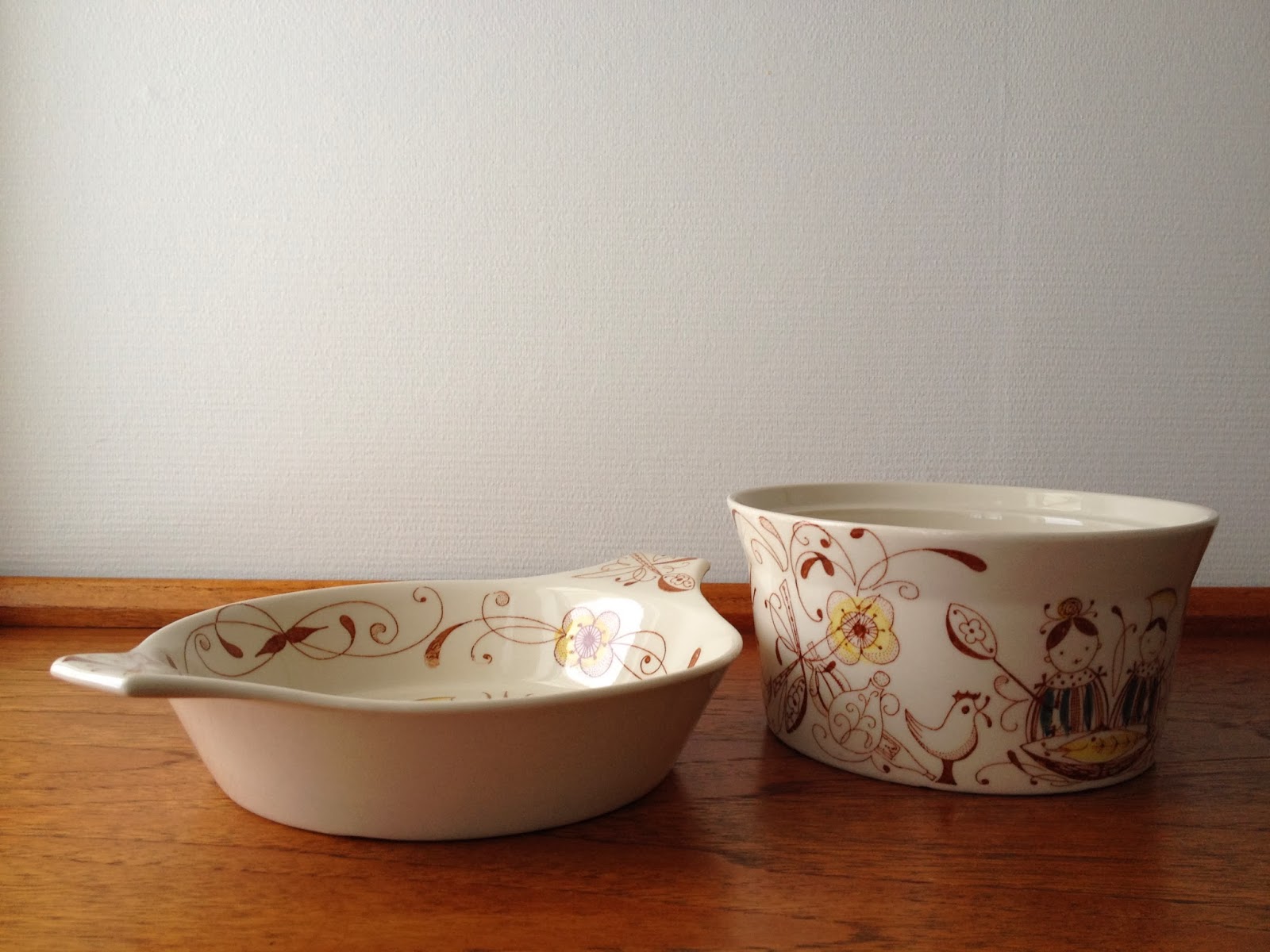 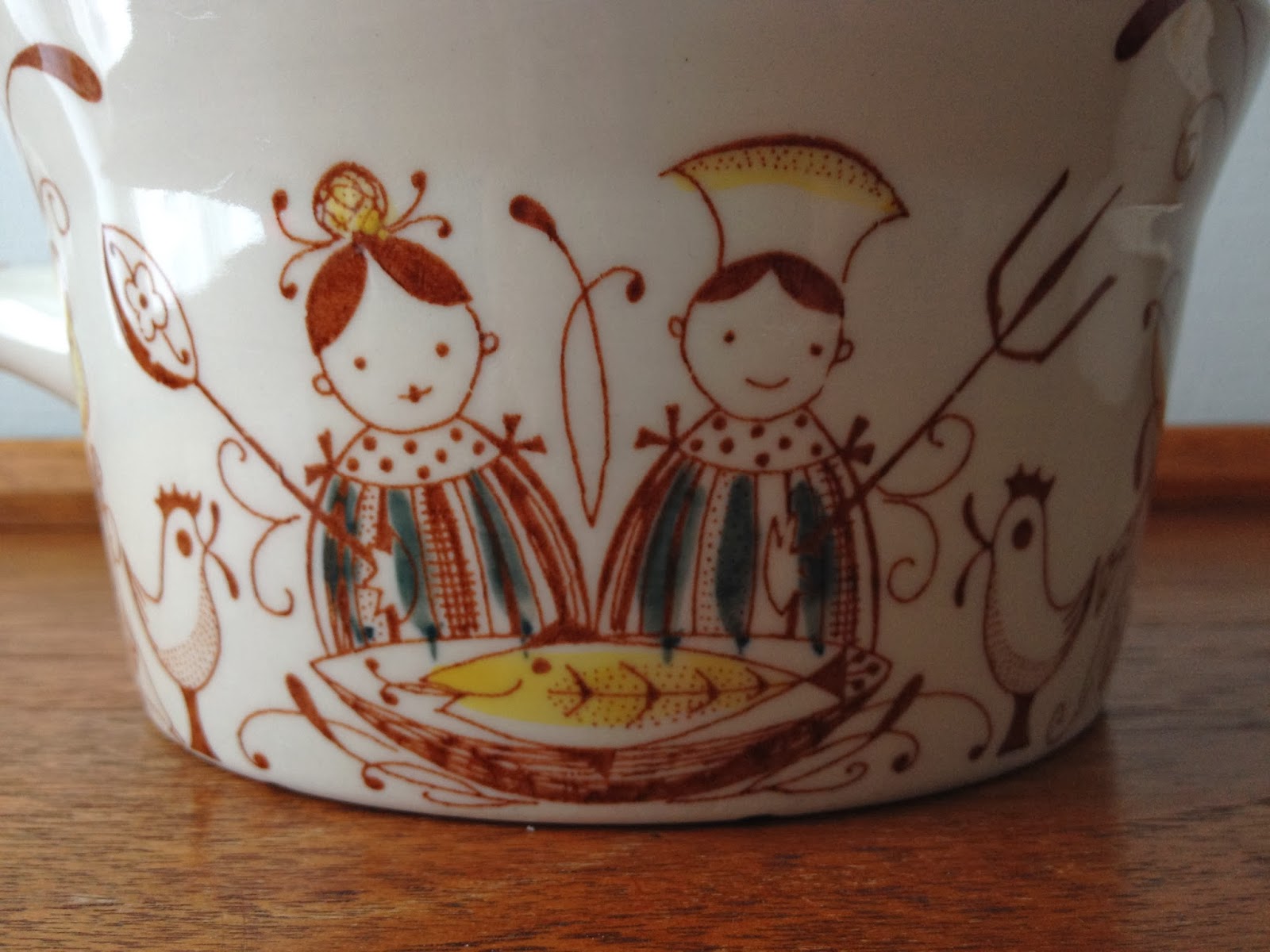 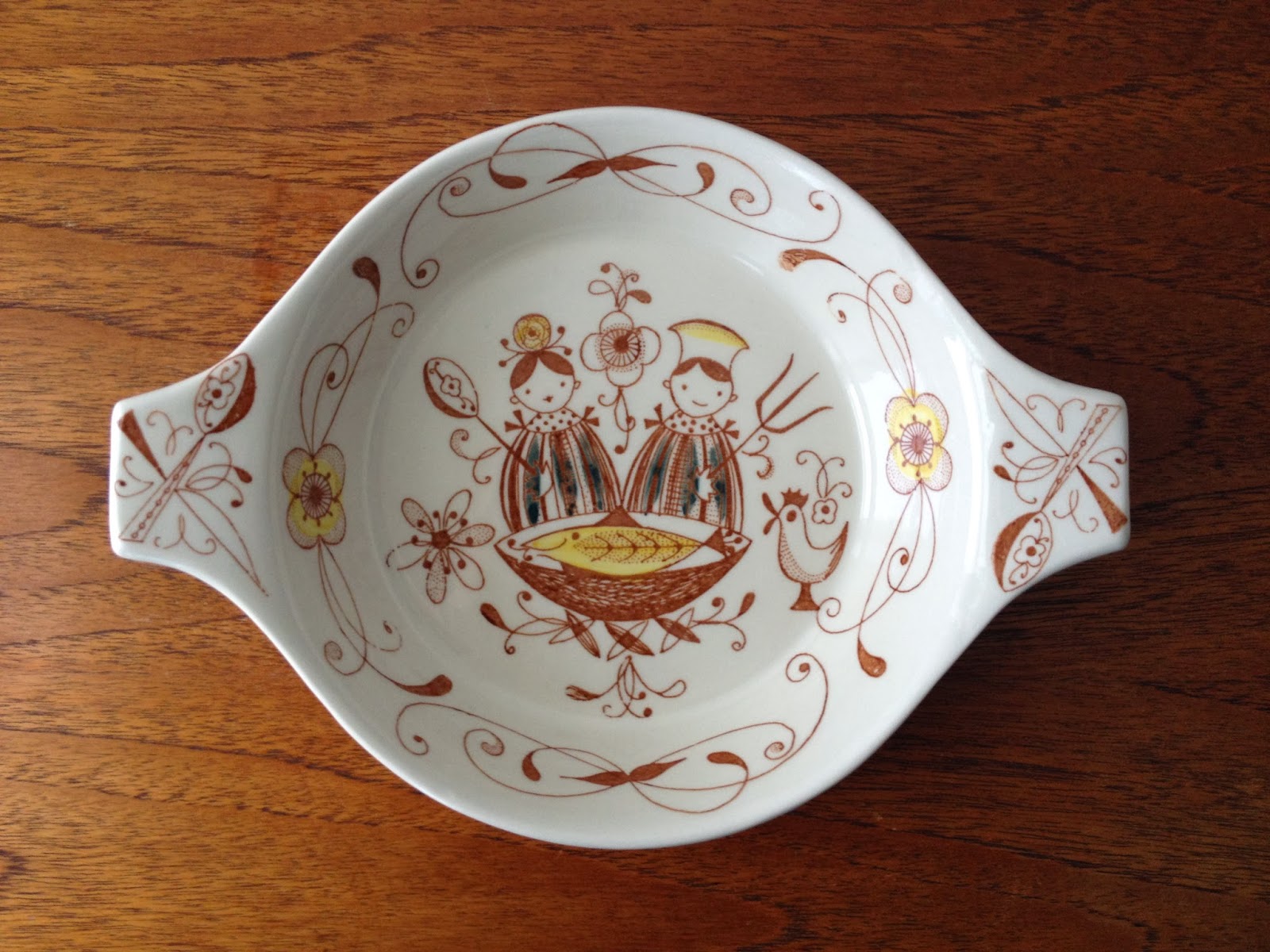 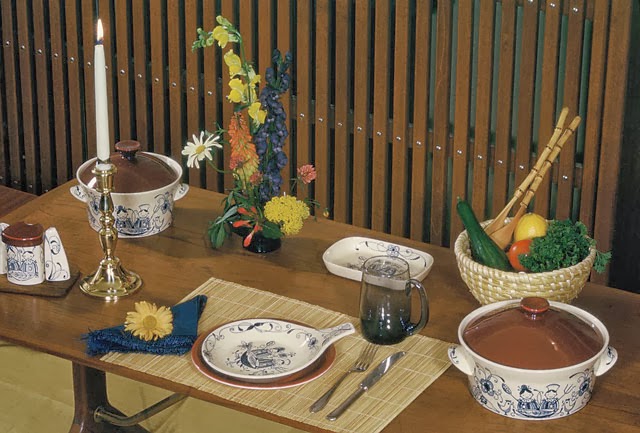 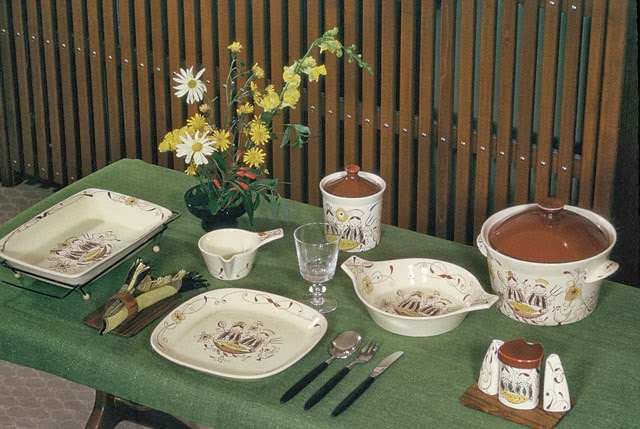 Not quite so quirky is this simple award- winning Hadeland "Multe" (cloudberry) bowl, designed by Willy Johansson in 1966. I really looks like it could have been designed today, doesn't it? I've found two larger bowls in this lovely smokey grey earlier. The design also comes in a deep emerald green. 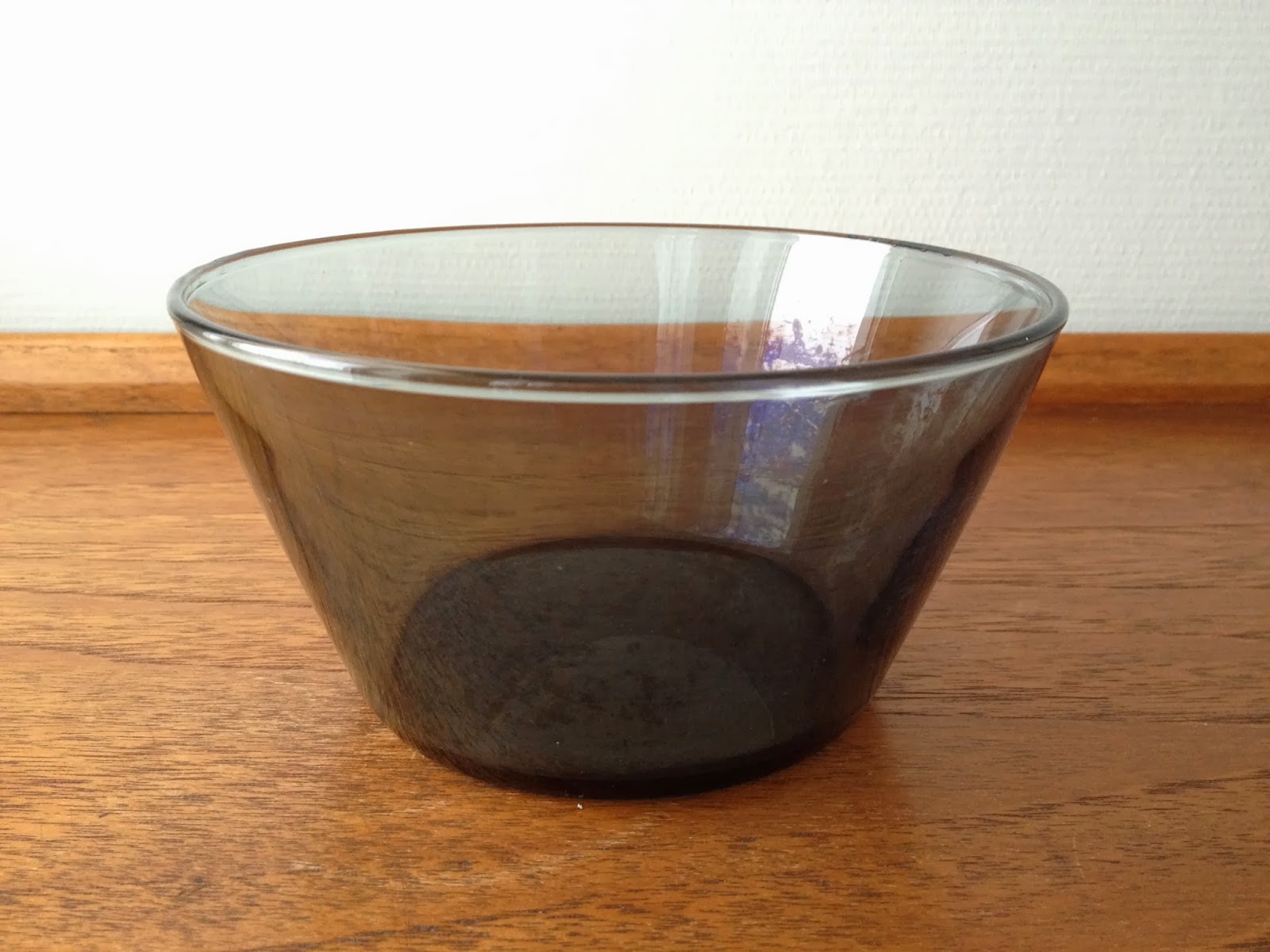 Finally, a small Stavangerflint souvenir dish, handpainted by Inger Waage. It shows scenes from the city of Bergen, Norway's second largest city which is known for it's picturesque city centre, surrounded by mountains. 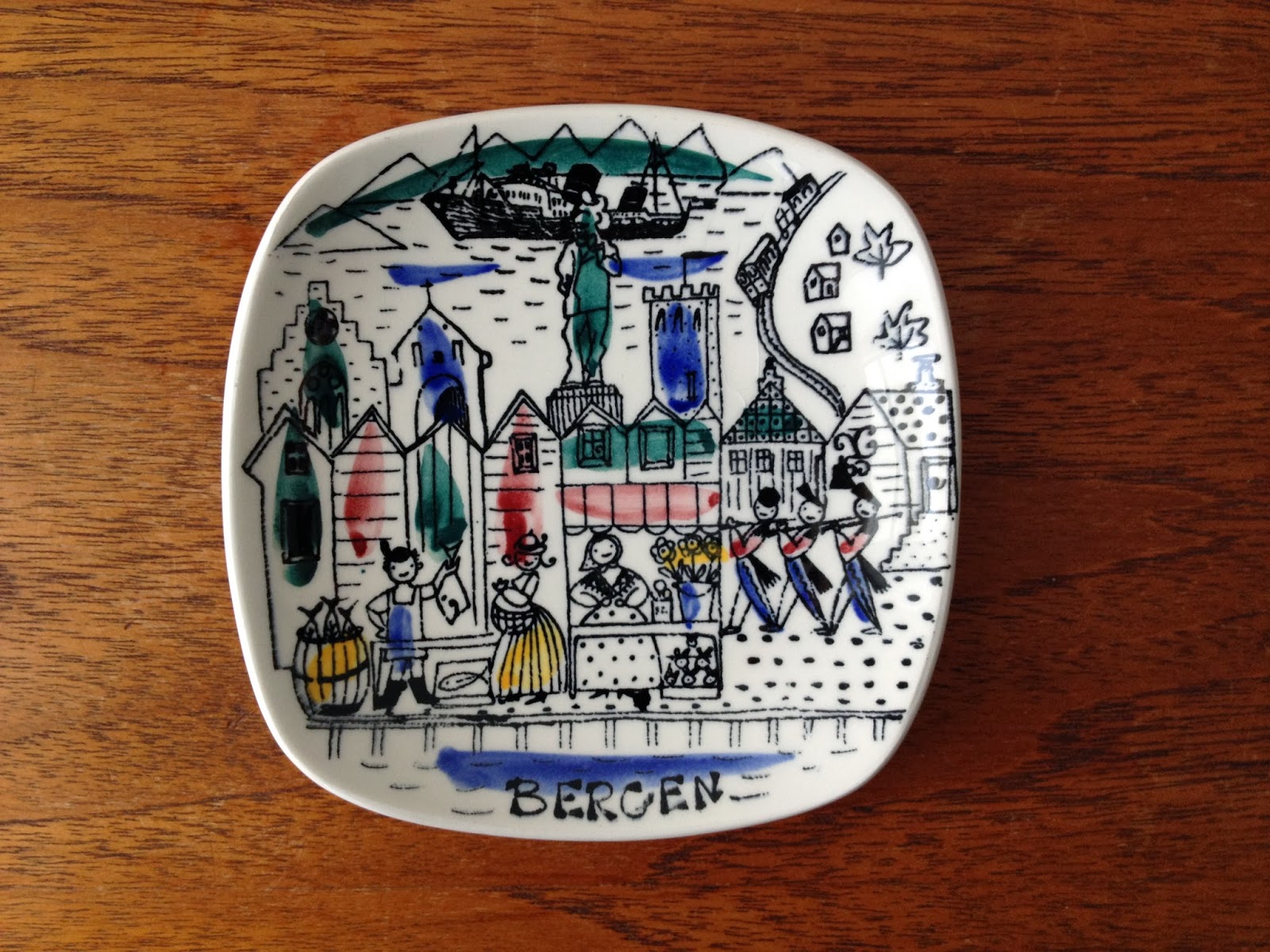 tove
I am a norwegian architect with a keen interest in pottery, glass, art, mid- century objects, furniture and interior design, and, of course, architecture... I do my fair share of thrifting and love to research the origin and stories behind great objects from the past. Please feel free to comment, I'd love to hear from you! 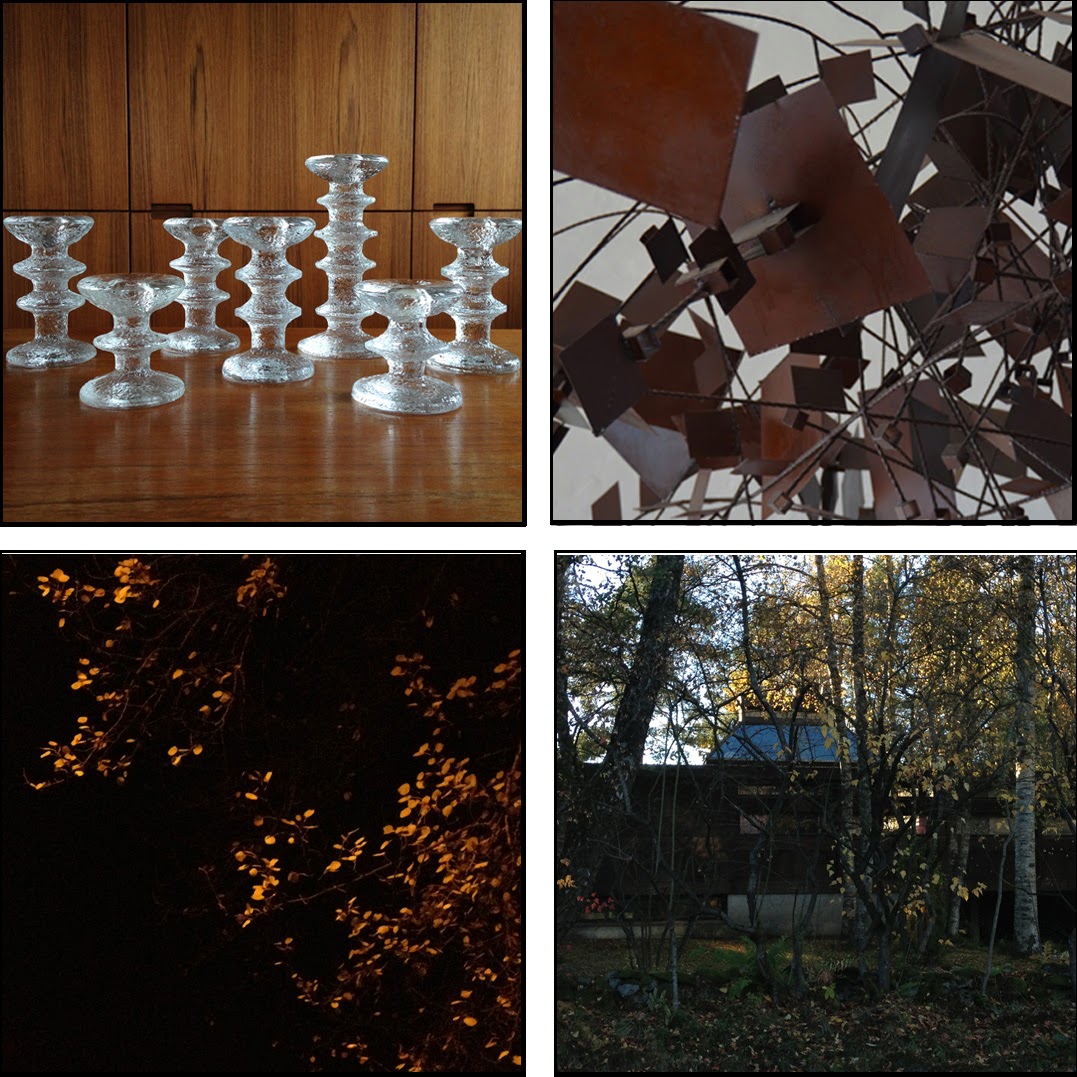